These three different Herring Gulls were photographed at harbour (), the in February and March 2002 and stand out because of their pale plumage and especially their pale primaries. On several websites (e.g. Dick Newell's and the Norwegian Gull Page) these type of gulls are associated with hybrid Herring (argentatus) x Glaucous (hyperboreus) Gull. Personally I tend to think that these type of birds are a pale variation in (northern) argentatus-Herring Gulls since they somehow seem to miss hyperboreus-elements such as its structure and firm bill. As for the reason why these pale birds appear in the first place is another matter which may include some hyperboreus-genes in the (distant) past. See for the argentatus-theory also P.J. Grant's Gulls (2nd edition), picture #248 and 251. For more convincing hybrids (with smithsonianus) see this page.

The gulls in this page differ from most of the gulls on the aforementioned websites in their small, argenteus-like size and structure. Although these could be all females they do not show the large and bulky posture of northern argentatus as in this page and this page. And instead of these bird showing any hyperboreus-influences in structure (which is the least one would expect from a hybrid) they look very Herring Gull. Typically these pale gulls always seem to turn up in these parts in February and March, whilst argentatus arrives from October onwards. 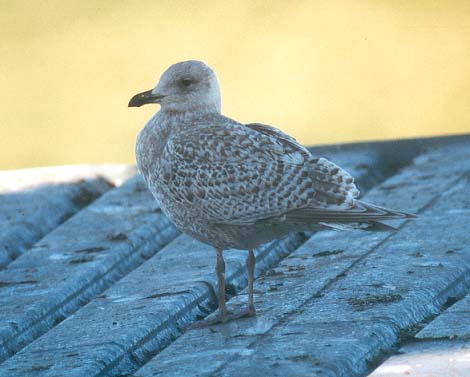 This first bird was photographed on 15 February. The same bird appears in the more sunny picture below. The bird was rather small but must be a true argentatus since is has retained almost all juvenile scapulars. Apart from pale(-tipped) primaries this bird also shows pale tertials. Although the upper tertial has a different pattern than the lower ones I don't think its 2nd generation. Note that the 2nd bird in this page (below the bar) shows exactly the same tertial patterns. In flight this bird showed a sandy but solid dark tailband, unlike the 2nd bird. Apart from its paleness the pattern on the wingcoverts is typical for Herring Gull. 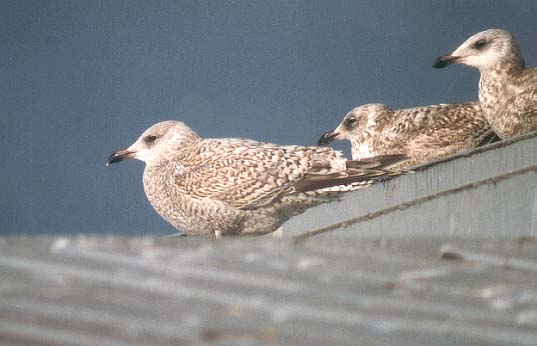 This second bird was photographed on 19 February and is very intriguing indeed. Although its overall structure is very Herring Gull (and therefore an unlikely hybrid) the patterns on its breast, belly and tail (see the picture below) are unlike any HG I've seen so far. Note that this bird seems to show 2nd generation scapulars but does not show 2nd generation greater wingcoverts; there are merely two feathers out of position. 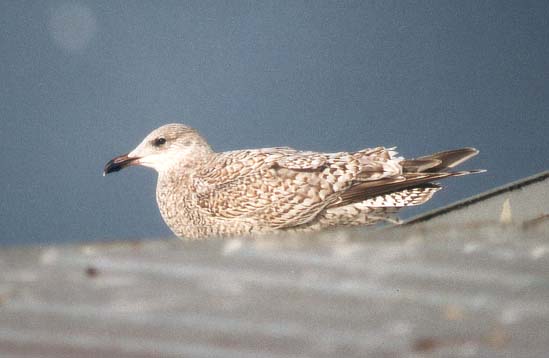 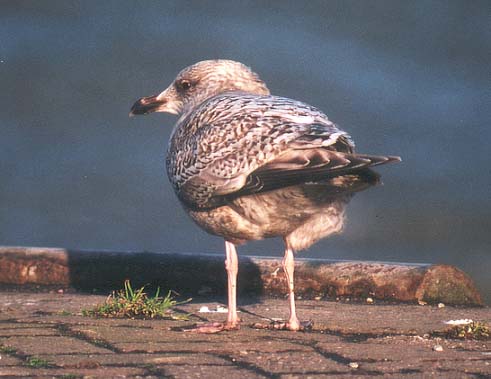 This third bird was photographed on 7 March and however least convincing in its appearance, it may form a sort of 'missing link' between the type of HG's above and HG,s with merely (vague) pale tips to their primaries. The same bird appears in the picture below. 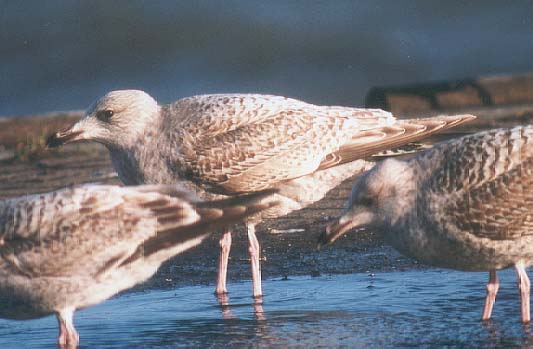